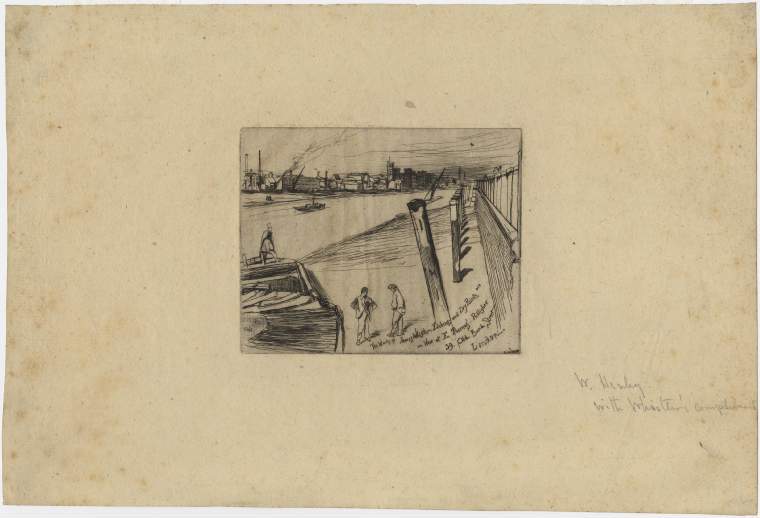 To sketch this view, the artist stood with his back to the huge Millbank Penitentiary, now the site of Tate Britain, with the dark silhouette of Lambeth Palace in the far distance.

This plate was made as an announcement card for the exhibition of Whistler’s etchings newly published by Serjeant Thomas in April 1861. It was subsequently published in 1871 in the ‘Thames Set’, but this is a later state with additional lines in the sky and the word ‘London’ added to the address.

A note in the margin shows that Whistler sent this impression to the writer William Ernest Henley (1845-1902), who shared Whistler’s love of the Thames and was one of the first to publish an appreciation of his work. His poem ‘To James McNeill Whistler’ appeared in his book Rhymes and Rhythms, 1889-92:

Under a stagnant sky,
Gloom out of gloom uncoiling into gloom,
The River, jaded and forlorn,
Welters and wanders wearily–wretchedly–on;
Yet in and out among the ribs
Of the old skeleton bridge, as in the piles
Of some dead lake-built city, full of skulls,
Worm-worn, rat-riddled, mouldy with memories,
Lingers to babble to a broken tune
(Once, O, the unvoiced music of my heart!)
So melancholy a soliloquy
It sounds as it might tell
The secret of the unending grief-in-grain,
The terror of Time and Change and Death,
That wastes this floating, transitory world.

What of the incantation
That forced the huddled shapes on yonder shore
To take and wear the night
Like a material majesty?
That touched the shafts of wavering fire
About this miserable welter and wash -
(River, O River of Journeys, River of Dreams!) -
Into long, shining signals from the panes
Of an enchanted pleasure-house,
Where life and life might live life lost in life
For ever and evermore?

O Death! O Change! O Time!
Without you, O, the insuperable eyes
Of these poor Might-Have-Beens,
These fatuous, ineffectual Yesterdays!