The Beggars from 'The First Venice Set' 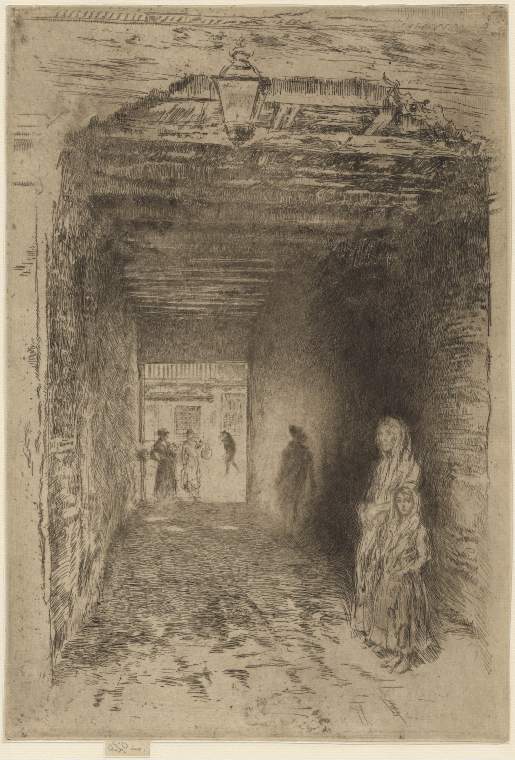 View this in high res

Etching and drypoint printed on ‘antique’ laid paper trimmed by the artist, 1879-80.

In July 1879 the Fine Art Society commissioned Whistler to go to Venice and return by December with a set of etched plates. Whistler set off in September but did not return until the following November, having etched many more plates than he took with him. Twelve were initially selected for publication as ‘The First Venice Set’ (Venice, a Series of Twelve Etchings) and were exhibited at the Fine Art Society in December 1880. A second exhibition was held in 1883 (see Etchings & Dry Points. Venice Second Series, London 1883, 1st & 2nd editions) and ‘The Second Venice Set’ published in 1886 (see Long Lagoon).

This is one of the largest prints in the series, larger than the plates that Whistler brought with him from London; he ordered a plate specially from a local Venetian craftsman. The view shows a passageway leading from the enclosed Corte de la Carozze to the brightly lit Campo Santa Margarita in Dorsoduro. The figures were altered after his return to London, with the help of a separate drawing, and with the printer Thomas Way serving as a model. The remarkable depiction of light around the dark figure of the boatman on the right of the passageway became less prominent in later state changes made during the protracted process of printing the edition, which (as in the case of Reading in Bed) remained incomplete at Whistler’s death.