The Doorway from 'The First Venice Set' 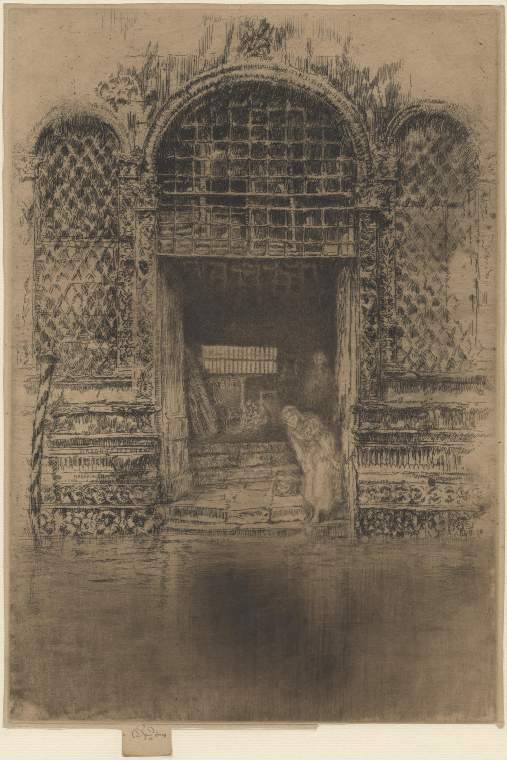 Etching, roulette and drypoint printed on ‘antique’ laid paper trimmed by the artist., 1879-80

Etched on one of the largest ‘Hughes & Kimber’ plates that Whistler took with him from London to Venice, this view of the Palazzo Gussoni was drawn from a boat on the Rio de la Fava, east of the Rialto. A chair-repairer’s stock of chairs hangs above the interior.

In successive states the artist changed the figure leaning over the water. In this rich impression of the penultimate state, he used inks of two different consistencies and colours to distinguish pictorial elements: a crisper, stiffer black ink for the architectural details, and a softer brown ink for the dimly-lit interior and the water.

Apart from a few etched marks and striations made with a spiked roulette, the reflection in the canal is achieved entirely by Whistler manipulating the ink on the surface of the plate at the printing stage, making each impression unique.

Whistler’s printing was influenced by contemporary interest in the ‘monotype’ process, which involved an artist brushing ink directly onto a blank printing plate. Whistler would have known the monotypes of Vicomte Lodovic Lepic, and one of Whistler’s companions in Venice, Otto Bacher, was keen on making monotypes at this time.

As in the case of The Beggars, the printing of the edition of this plate continued throughout Whistler’s lifetime and remained incomplete at his death.