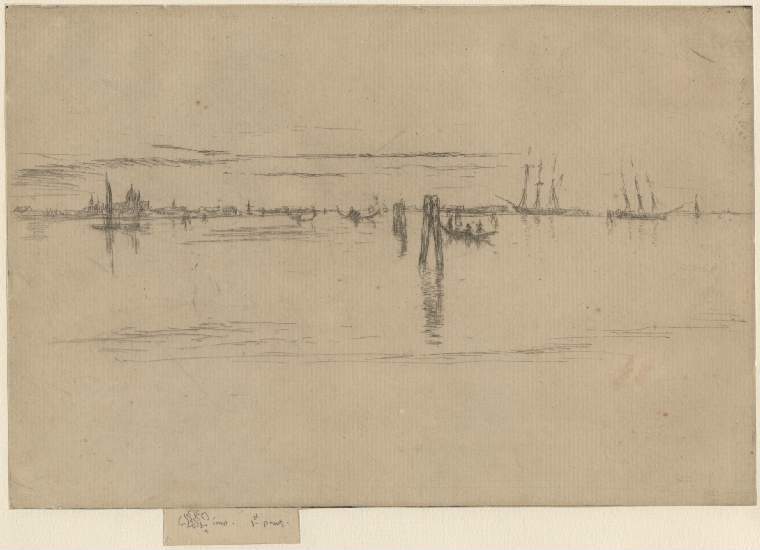 Etching printed on Dutch(?) laid paper trimmed by the artist, 1880

Etched on one of the middle-sized plates that Whistler brought with him from London to Venice, this print was exhibited in 1883 but not published until 1886 as one of the 26 prints issued by Dowdeswells’ in ‘The Second Venice Set’. One of the most expansive of the Venetian views, it looks west across the Lagoon to the Giudecca, with the dome of the Redentore church, seen probably from the area around the Public Gardens, or from a boat nearby. This rare impression was cleanly printed in black ink before Whistler etched his monogram on the plate; later impressions were typically printed in browner ink, with lavish tonal wiping effects. As in The Beggars and The Doorway, Whistler’s graphite inscription confirms that he printed it himself.

The original mount of this print (only a fragment survives) is inscribed in ink by Whistler To Mrs George Lewis and signed with his butterfly. The recipient was Elizabeth Lewis, who also owned Balcony, Amsterdam. She passed the print (and mount) to her daughter Katherine, who bequeathed them to the Fitzwilliam Museum in 1961. Unfortunately at some point the mount was separated from the print. The original appearance is here recreated photographically, with the extent of the missing top margin estimated from the appearance of other surviving Whistler mounts. When the print was first exhibited in 1883 it would have been displayed in a white frame as part of Whistler’s ‘Arrangement in White and Yellow’ (see Etchings & Dry Points. Venice Second Series, London 1883, 1st & 2nd editions).